A toy model for two-parameter scaling: the disordered Kitaev chain¶

Before we learn what happens to topological insulators in the presence of disorder, let’s decide on a specific example for concreteness.

Topology makes the behavior of disordered systems richer, however a careful simulation of properties of disordered topological insulators may take weeks, since we need not only to take large system sizes (we need to consider the lengths much larger than mean free path), but also we need to average over disorder.

Luckily, unlike in the non-topological case, a one-dimensional system can already show interesting properties in the presence of disorder, so we can just reuse the familiar Kitaev chain and add disorder to it.

It is nothing but the same 1D tight-binding model that we saw in week one,

The only difference from what we used before is that now the chemical potential \(\mu_n\) varies randomly from site to site. For example, we can sample the values \(\mu_n\) from a Gaussian distribution with mean value \(\mu_0 \) and standard deviation \(U\).

The simpler effect of disorder¶

In addition to transmission through a finite chain we can now compute its topological invariant \(\mathcal{Q}\).

Whenever \(\langle Q\rangle = \pm 1\), we know that the system is in one of the two insulating phases and there is no reflection whatsoever.

Let’s try the most obvious thing and see what happens to \(\langle Q\rangle\), as we increase disorder strength.

So below we see \(\mathcal{Q}\) averaged over 100 different realizations in a disordered Kitaev chain with 30 sites as we gradually increase \(U\): 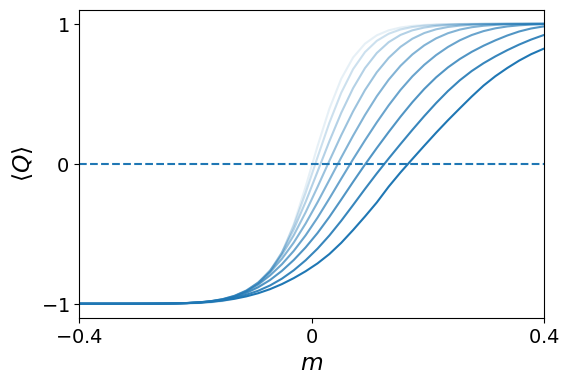 (Darker color corresponds to larger \(U\).)

What you see is that far away from the transition, when the gap in the clean limit is very large, disorder does not matter. Around the transition, the average value of \(\mathcal{Q}\) changes from \(-1\) and \(+1\).

The second effect, despite looking mysterious, appears just because the disorder changes the effective values of the Hamiltonian parameters. For small \(U\), this can be understood in terms of the Born approximation, which allows to compute effective disorder-averaged band structure parameters, given the properties of disorder. The lowest order correction to \(m\) for the disorder Kitaev chain is simply \(m_\textrm{eff} - m \sim -U^2\), and weak disorder indeed drives the system to a topologically nontrivial state by lowering the effective value of the mass.

Since this phenomenon appears with disorder, it was initially dubbed “topological Anderson insulator”. This name is certainly not accurate: the band structure parameters approach the effective ones on the length scale of mean free path, and before the Anderson scaling flow begins.

What would happen if instead of $\det r$ we use $sign \det r$ for invariant?

Two parameter scaling in one dimension¶

Speaking of the scaling flow: the scaling hypothesis appears to be very powerful, does the topology have any impact on it?

We can understand some limits. First of all, if \(g\gg 1\), the system is a metal, and there can hardly be any trace of topology left. However when \(g \lesssim 1\), the system can become one out of several topologically distinct types of insulators, and we can expect some sort of transition between different insulating phases.

The rational assumption at this point is to assume that the scaling hypothesis still holds, but in addition to \(g\) it depends on the average topological invariant of the disordered ensemble \(\langle \mathcal{Q} \rangle\).

Just like in the case of the non-topological phases, there is no universal proof that this form of scaling flow is correct. Instead, there is a vast amount of mixed numerical and analytical evidence that this is correct.

Let’s try and verify our hypothesis by constructing the scaling flow of the disordered Kitaev chain. We can do it in the following way:

Here’s what we get: 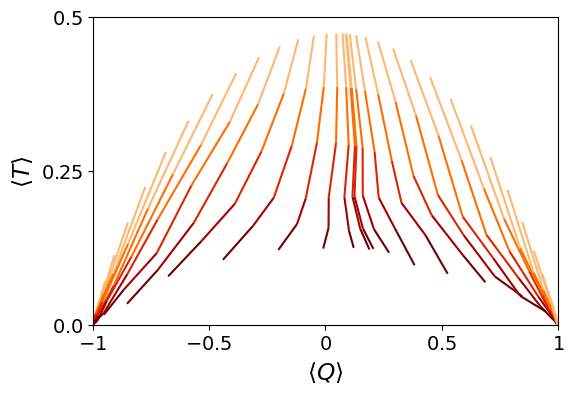 The lines have a direction, which tells us how \(\langle Q \rangle\) and \(\langle T \rangle\) change as we increase \(L\). In the plot above, \(L\) is increasing in going from bright to dark colors.

The first and the most important observation we can make is that the lines do not intersect, which confirms the scaling hypothesis.

Most of the lines tend to one of the two points \((\langle \mathcal{Q} \rangle, \langle T \rangle) = (-1, 0)\) or \((1, 0)\). These correspond to two insulating systems with different topological invariants. We can say that quantized values of \(\langle \mathcal{Q} \rangle\) are insulating, and they correspond to attractive fixed points of the flow.

Finally, the point \((0, 0)\) is a saddle point: the flow goes towards it along the vertical axis, and away from it along the horizontal axis.

We now understand better why two parameter scaling is necessary in the presence of a topological invariant. Even in the presence of disorder, there can be topologically distinct insulating phases. Therefore, saying that every system flows to an insulator is not enough anymore. Including the average topological invariant as a second scaling parameter allows to predict towards which insulating phase the system will flow.

The flow, we just calculated is in fact valid for all one-dimensional topological insulators and superconductors. In the case of a \(\mathbb{Z}\) invariant, the saddle points are located at \((\langle \mathcal{Q} \rangle, \langle T\rangle) = (n+1/2, 0)\).

It is important to notice that one important result of the standard scaling theory regarding one dimensional system remains true: in the plot above all lines flow to no transmission, or in other words there are no metallic phases in the flow diagram.

What does the 2 parameter flow diagram predict about the infinite size limit?

The correct answer is:
There's a localized topological and non-topological phase separated by a transition point.
The phase is determined by the long length (i.e. dark part of the figure) which is almost always in small Ti.e. supporting localized states. Here the states either flow to $Q=+1$ or $Q=-1$ (non-top or top respectively) except near $Q=0$ has a slower decay.

The scaling flow of 1D topological insulators can be solved exactly, and especially for our system we can very easily derive some of its properties.

The behavior of the disordered Kitaev chain close to the phase transition can be understood within an effective Dirac Hamiltonian in the continuum limit. The Hamiltonian is similar to the one, we studied in week one when we were concerned with a domain wall

with \(p\) the momentum along the chain, \(v\) the velocity of the modes, and \(m(x)\) the position dependent gap which couples left-movers and right-movers.

We want to compute the transmission probability through the chain at zero energy. As we saw in week one, an eigenstate at zero energy satisfies the relation

proportional to the average value of the random mass in the chain.

An incoming wave from the left (negative \(x\)) entering the scattering region is partially transmitted through it and partially reflected. We can find the reflection and transmission amplitudes \(r, t\) by substituting \(\Psi(0)=(1,r)^T\) and \(\Psi(L) = (t,0)^T\) in the equation above. By solving the simple linear system that comes out of the substitution, we get immediately

The scattering topological invariant \(Q\) for the Kitaev chain is the sign of the determinant of \(r\). In our case, since \(r\) is just a number, we immediately get

We see that the topological transition happens when \(\alpha=0\). That is, to model the transition, we think of \(m(x)\) as a random function of \(x\) which can take positive and negative values with equal probabilities.

The details of the probability distribution for \(m(x)\) are not very important as long as the distribution is characterized by a finite correlation length \(\xi \ll L\) - that is, values of \(m\) at points more distant than \(\xi\) are statistically uncorrelated.

If this is the case, \(\alpha\) is the sum of an order \(\sim L/\xi\) of uncorrelated values of \(m\). By using the central limit theorem, we can say that \(\alpha\) is a normally distributed variable with zero mean and a variance growing linearly in \(L\). Since \(\alpha\) is a random variable, so is the transmission probability \(T=|t^2|=\cosh^{-2}(\alpha)\). From the probability distribution of \(\alpha\), we can obtain the scaling behavior of \(T\) as

Just like the regular scaling flow, the topological one is also richer in \(d>1\).

The oldest known example of the two parameter flow is unsurprisingly the quantum Hall effect. The flow looks similar to what we just calculated in 1D, here: 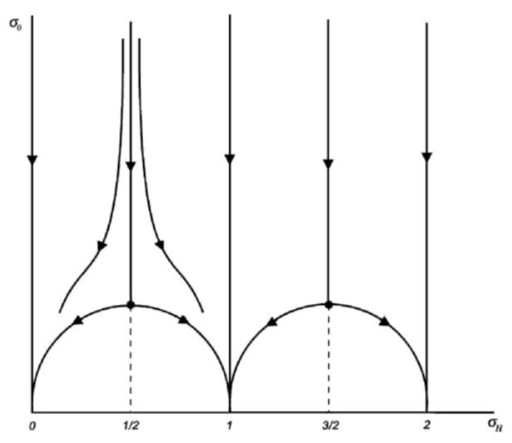 By Wout Neutkens (Own work) CC BY-SA 3.0, via Wikimedia Commons

The axes are the same as before - the horizontal one is the topological invariant given by \(\sigma_H\), and the vertical axis the longitudinal conductance. The saddle point separating the different topological phases is now elevated to a finite critical conductance, which is known to be around \(0.5-0.6\) conductance quanta.

Metallic phases are the final part that we need to consider. The appearance of those at high conductance is governed by the same rules as without the topological invariant. The reason for this is that the topological effects are all \(\mathcal{O}(1)\) corrections to conductance, and are therefore only important at \(g\sim 1\).

An extra attractive metallic fixed point can make the flow diagram more complicated. For example, the metallic phase can completely separate the two insulating phases and eliminate the fixed point. What happens in each particular case is not always certain, and is still an open research topic.

Disorder and the scaling theory of localization Topics for self-study