Taylor Hughes from the University of Illinois at Urbana-Champaign will describe the interplay between defects in crystals and weak topological insulators.

Let us now go through the main points that lead to this conclusion, and argue for why it has to be that way.

There are many different types of defects in crystals: vacancies, substitutions, grain boundaries, dislocations, and many more.

What kinds of defects are important for topology? Consider a vacancy for example: 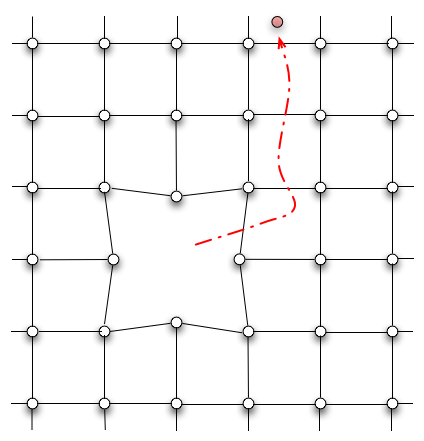 To create a vacancy, we need to remove a single atom (or all the atoms following one line). Can this type of defect carry a topologically protected state?

We already know that topological protection requires a Hamiltonian that cannot be created locally. For example, in order to create a single Majorana bound state at a phase boundary, another Majorana must appear elsewhere. Removing an atom or a line of atoms only changes the system locally, so the other topologically protected state cannot appear anywhere.

A simple vacancy is therefore not interesting from a topological point of view. What kinds of topological defects would work then? Crystallographic defects leave nothing different since they leave the bulk Hamiltonian unchanged far away from the defect core. This means we need to do something nontrivial to the crystal so that it cannot be removed locally.

Examples of such defects are dislocations: 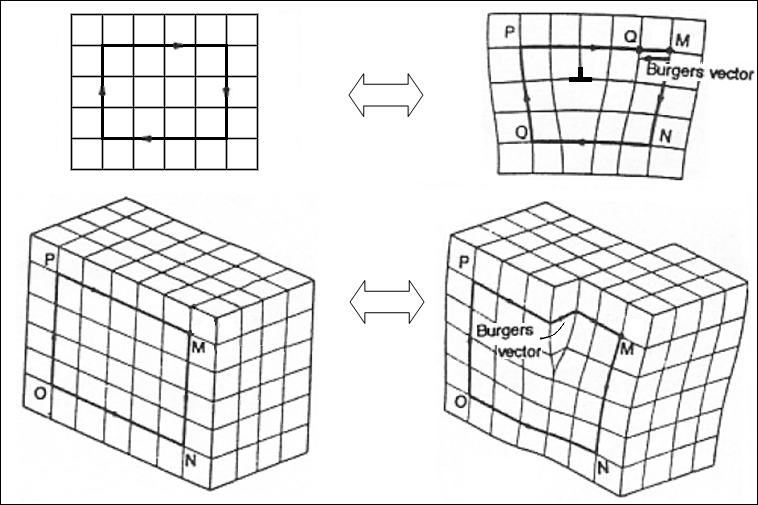 In order to create a dislocation we need to cut a crystal along one plane and displace all the atoms along that plane by the Burgers vector. This has to be done all the way to the crystal boundary (or infinity in an infinite crystal), so the dislocation affects the entire system. This means that a dislocation cannot be removed locally.

As Taylor Hughes explained, a dislocation can be detected infinitely far from its core by going around it and verifying that we don’t return to the point of origin. We cannot simply remove a dislocation by locally replacing some atoms. Therefore, it may carry a topologically protected mode.

Unsurprisingly, crystallographic defects that cannot be removed locally are called “topological”, which brings us to the first important conclusion:

Topological crystallographic defects are the ones that may carry topologically protected modes.

The role of defect dimensionality¶

In a sense we already know that it does. We can think of the crystal surface as a defect that breaks translational symmetry, and so it is a crystallographic defect. The strong topological invariant is the quantity that tells us whether or not the bulk can be continuously deformed into vacuum, or equivalently, whether or not the surface can be smoothly removed without closing the bulk gap.

This is where the weak invariants come into play.

The topological invariants with dimensionality \(d_{edge}+1\) form a vector or a tensor of the weak indices. The last thing we need to figure out is how to extract information about what happens at the defect from the weak indices.

We have almost arrived at the criterion for the appearance of protected states in dislocations.

Let’s now test this idea and see if we can observe the protected dislocation states.

Now that we know the main concepts, let’s apply them to concrete examples. Let’s take two models for topological insulators that we already know and apply them to lattice systems with dislocations.

We will create a 3D weak topological insulators by stacking many layers of 2D topological insulators along the \(z\) direction. For the individual layers, we will use the BHZ model (by the way, note that the lecture today was given by the H of BHZ!) for a time-reversal invariant topological insulator, and the square lattice model for the quantum Hall effect that we used in week 4. In this way, we can study dislocations both with and without time reversal symmetry. In both cases, we take the hoppings between different layers to be relatively weak compared to those within the same layer.

Let’s start with a screw dislocation connecting two layers. The system looks like this: 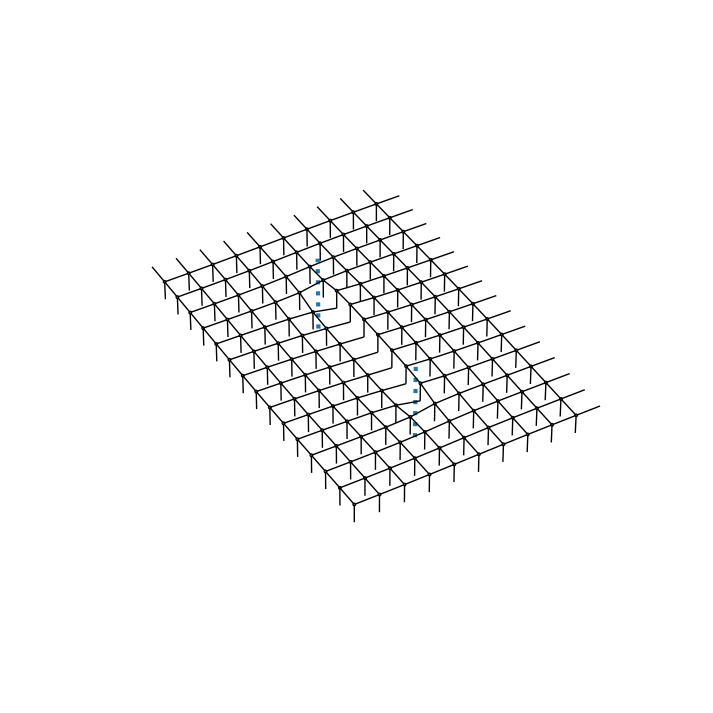 The figure above shows a single unit cell in the \(z\)-direction that is infinitely repeated to obtain the dispersion relation. Along the \(x\) and \(y\) directions the system has periodic boundary conditions.

Let’s look at the band structure along the \(z\) direction, and the wave functions of the corresponding states.

You see that the band structure is gapless: because of the presence of the dislocation, there are states dispersing below the bulk gap along the \(z\) direction.

Here, the fundamental difference between the BHZ model and the quantum anomalous Hall case is that in the former, the gapless states at the dislocation are helical, while in the latter they are chiral.

We can also look at an edge dislocation: 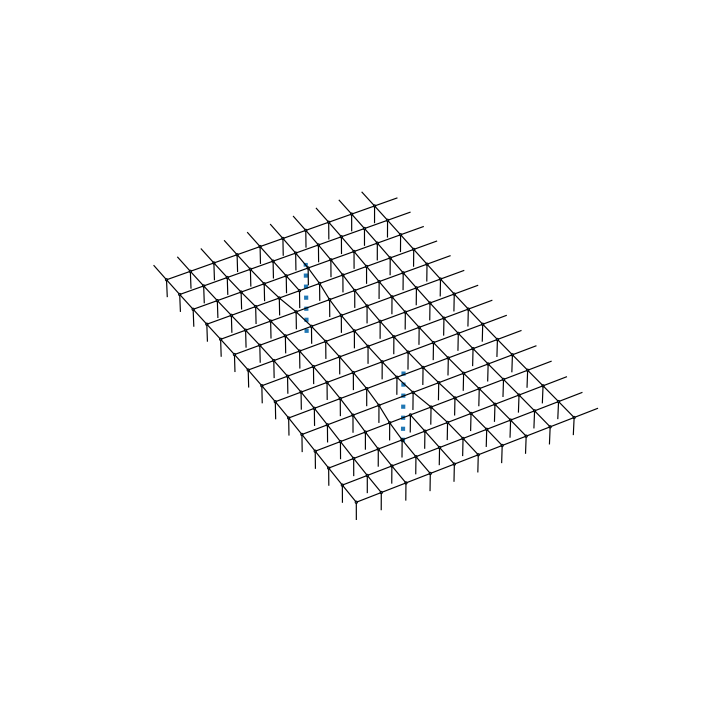 The Burgers vector is now along the \(y\)-direction, and it still has unit length. The band structure and the wave function plots show similar behavior.