Crystalline topological insulators are introduced by Liang Fu from MIT.

The role of crystalline symmetries¶

In the very beginning of the course, we told you that conservation laws - unitary symmetries of the Hamiltonian - do not lead to striking consequences on topology. They allow to reduce the problem by making the Hamiltonian block-diagonal, but not much else (see also Shinsei Ryu’s introductory video to week eight).

At first sight, it may seem that crystalline symmetries: mirror or reflection symmetries, rotation symmetries, and so on - are no exception to the above consideration. They are unitary symmetries whose operators commute with the Hamiltonian.

Nevertheless, the role of crystalline symmetries can be quite subtle and it can have important consequences. The reason is that crystalline symmetries are non-local. They relate one point in a crystal to another point, possibly a very distant point. This means that in terms of the Bloch Hamiltonian of the crystal, these symmetries mix different values of momentum.

Due to this type of constraint on the Brillouin zone, crystalline symmetries can have important consequences on the topological properties of Bloch Hamiltonians.

Note however, that sometimes the mere presence of a surface can break a crystalline symmetry of the bulk, so that one should be careful when applying the bulk-boundary correspondence to properties based on crystalline symmetries.

In which case can inversion symmetry protect gapless surface states?

The correct answer is:
Never.
Any surface would break inversion symmetry of a crystal.

In this case, the topological classification follows rather simply from our earlier discussion. \(C_2\) is a unitary symmetry with eigenvalues \(\pm i\). We can split our Hamiltonian into the corresponding two sector \(H_{\pm}\) acting on the \(C_2=\pm i\) sectors respectively. Each of the Hamiltonians \(H_{\pm}\) are 2 dimensional Hamiltonians in class A (i.e. with no symmetry) and therefore we can associate a Chern number \(N_{\pm}\) with each of them.

Naturally, the same recipe allows to construct a reflection symmetric topological insulator starting from any other topological invariant, not just a Chern number. We will now try to do this.

How would you attempt to make a model of a topological insulator with surface states protected by reflection symmetry?

The correct answer is:
By stacking many layers of a lower dimensional topological insulator, and coupling them in a reflection-symmetric fashion.
Such a stack would have a reflection symmetry around any of the layers, which is not broken by the presence of a surface parallel to the stacking direction.

Let’s think, what could be the simplest topological system protected by reflection symmetry.

We need \(d=2\), since the only possible reflection symmetry is broken by the boundary in \(d=1\), and we can once again consider coupled Majorana nanowires.

We can put two nanowires in a unit cell of the lattice and make their parameters different. In this way, the weak topological invariant is trivial (there is an even number of Majoranas per unit cell).

On the other hand, if the hopping between the nanowires is reflection invariant, there will be a reflection symmetry axis passing through each nanowire, like this:

If we do everything right (this does require some trial and error in searching for the hopping that actually can couple the two Majoranas from the edge), we get a painfully familiar dispersion:

In a similar way, we can also construct a tight-binding model with a mirror Chern number. The only difference with the Majorana wires that we need to worry about is that Chern number is a \(\mathbb{Z}\) invariant instead of \(\mathbb{Z}_2\).

This means that the Chern number of the alternating layers has to have opposite signs, or otherwise the surface would just have surface states going in a single direction.

Once again, coupling the layers we get a familiar Dirac cone on the surface:

As mentioned by Liang Fu, three dimensional crystalline topological insulators have been both predicted and also found in nature. The magical material, which is topological turns out to be SnTe, which is actually a “rock-salt” structure. We won’t bore you with the details of the rock-salt structure, which you can find for yourself on Wikipedia.

We will just start with the key ingredients for the crystalline topological insulator, namely the symmetries of the crystal. These include, spatial inversion \(P\), time-reversal symmetry \(\Theta\) and most importantly the three mirror planes in the cubic Brillouin zone. The three mirror planes \(\Gamma L_1 L_2\), \(\Gamma L_3 L_4\) and \(\Gamma L_3 L_1\) in the Brillouin zone are reflection-symmetric directions that are created out of four time-reversal invariant momenta \(\Gamma, L_1, L_2, L_3, L_4\).

While the reflection symmetry acts non-trivially on general wave-vectors \(\bf k\), the symmetry preserves the mirror planes in the Brillouin zone. Following the idea of dimensional reduction that we used for three dimensional topological insulators (week 6) and also in subsequent weeks, we can define the topological invariant for the crystalline topological insulator in terms of the three mirror Chern numbers for the three mirror planes. For SnTe, all these mirror Chern numbers turn out to be \(N_{M}(\Gamma L_i L_j)=-2\). This topological invariant leads to surface Dirac cones on certain surfaces as shown below. 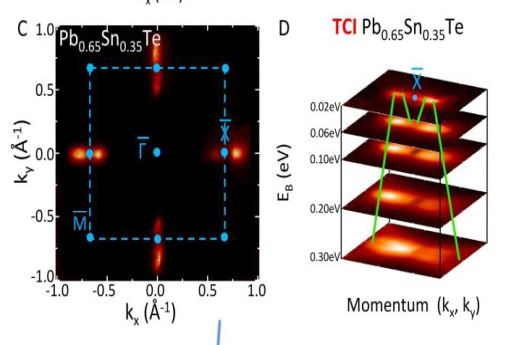 This surface spectrum is very easy to interpret.

The crystal surface you see here is perpendicular to two mirror planes projected on \(\bar{\Gamma}\bar{X}\) axes. Since the mirror Chern number with respect to each of these planes is \(-2\), there is a pair of Dirac cones near each \(X\)-point protected by a respective mirror symmetry.